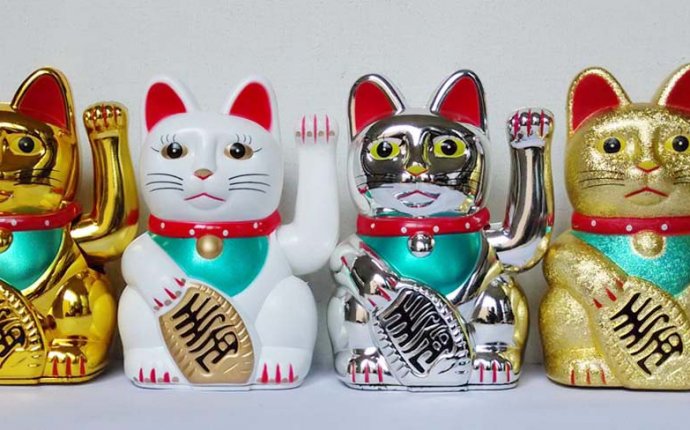 JAPAN'S famous "Lucky Cat" is incredibly irresistible, having now attained cult-like status amongst die-hard fans around the world. With paw raised high to wave in good fortune, we discovered when we visited Tokyo that Maneki Neko is found almost everywhere – in shops, hotels, restaurants, offices, parks, shopping malls and every kind of retail store and business. Maneki Neko is believed to attract wealth, health, customers and even high marks in examinations. In recent years, the cat's fame as a good luck charm for business and careers has extended well beyond the shores of Japan. FSW went in search of Maneki Neko's origins.

Cherished and collected by the Japanese for several hundred years, the cult of Maneki-Neko has, in recent years, spread throughout the world, due significantly to the rise of Internet websites devoted to it. He has strong followings throughout Asia, Australia, Europe, Britain, and more recently in America. The little cat from Japan has come to symbolize the perfect good luck charm for small and medium sized businesses everywhere where people love cats.

Cat lovers have little trouble relating to the cat being a good-luck charm. He is after all, incredibly cute, and his most famous offspring, the much loved HELLO KITTY, has smiled his way into many a kid's heart. But it is the good luck cat himself who has materialized into many shop windows around the world.

Lucky Cat can be seen perching on top of cash registers of restaurants in cities from Rio De Janeiro to Moscow, and from New York to San Francisco. He is sold in all Japanese gift-shops and Chinese grocery-markets in the major cities of the world, and in recent years, there has been an amazing number of modern style "versions" of Lucky Cat.

Maneki-Neko is a cat-collector's dream, simply because today, the cat is manufactured form almost every material possible. So you will find Lucky Cats made of ceramics, crystal, glass, wood, plastic and carved out of many different kinds of semi - precious stones. The image of the Cat is found on key-chains, place mats, pens, bags, clothes – so he has thus become every retailer's favourite. For in attaining cult status,
Lucky Cat has become big business.

From the hundred-dollar Kutani ceramic cats, the traditional Japanese welcome-to-my-shop figurines, the contemporary solar-powered, arm-waving automatons, the tiny Gotokuji Temple bells, to the large gold money-cats coming out of China – these products are all part of the wonderful "Beckoning Cat" family, charming their way across the world.

The Legends of Maneki Neko
Tama The Temple Cat
It is said that during the start of the Edo period during the17th century, in a rundown temple in the western part of Tokyo, lived a monk who kept a pet cat named Tama. Master and cat were so close they communicated almost instinctively. The monk said repeatedly to the cat, "Tama, I keep you and feed you despite my poverty. Can you not do something for this temple?"

One day, returning from a hunting expedition, Lord Hikone, was caught in a heavy downpour and took shelter from the rain under a big tree in front of the temple. Looking at the temple gates, he noticed that a cat was inviting him to enter the temple. The cat kept waving his hand until, intrigued, he left the shelter of the tree and ran towards the cat. Almost instantly, the tree he had been sheltering under was struck by lighting. Lord Hikone realised the cat had saved his life. In gratitude, he became the temple's benefactor and since that day, the temple prospered. When he died, Tama was buried in the temple grounds and in his honour, Maneki Neko was invented.

The Cat Who Saved The Courtesan

Another legend, said to have originated in the 18th century, describes the case of the cat who valiantly saved the famous courtesan Usugamo. She was well known as a lover of cats, and so she kept her cat by her side at all times. One night, while on her way to the toilet, her cat started pulling the hem of her skirt violently. Though she tried to chase it away, the cat did not stop the disturbance. Terrified by the cat's insistent action, Usugumo called for help. The owner of the house rushed to her and in a single swipe of his samurai sword, cut off the cat's head. The cat's head flew to the ceiling of the toilet, bit and killed a large snake hiding there ready to strike Usugumo below. Mortified, Usugumo mourned deeply over the mistaken death of her cat. To console her, the owner of the house presented her the cat's image carved out of aromatic wood. Many believe the image of the loyal cat was the origin of Maneki Neko.

The Image of The Cat of Imado

In the19th century, towards the end of the Edo period, an old woman who lived in Imado had a pet cat. She was so poor that one day she told her cat, "I'm sorry I have to abandon you – I can no longer afford to feed you". That night, the cat appeared in her dream and told her, " Tomorrow, gather some clay and fashion my image out of the clay. It will surely bring good luck to you". The old woman awoke and did as she had dreamed, made the cat's image in clay and discovered that the cat image attracted many buyers. The more the old woman made the Cat's images, the more customers visited her to buy them, so that eventually, she was no longer short of money. The cat's image in clay had relieved her from poverty. Many people say this was the true origin of Maneki Neko.

If you speak to modern Japanese who believe in the efficacy of their Lucky Cat, few are able to confirm if Maneki Neko indeed became popular in the nineteenth century when Japan was ruled by the Samurai classes. When the rule of the Samurai ended and modern Japan started with the Meiji period around 1870, Maneki Neko began appearing in many historical documents one after another.

The popularity of Maneki Neko is due in part to Japanese merchants being generally a superstitious lot. Until today, these businessmen and traders always keep some Lucky Cat charm at the front or back of their stores, in the hope that the Maneki Neko will attract plenty of customers into their shops. The cat has since become indispensable for its role in bringing luck to build a thriving business.

Why is the cat so popular ? The reason lies in its lovely character. Men and women, young and old, fall in love with its round face and big eyes at first sight. This is probably why Maneki Neko appears in so many corporate advertisements.

The Paw of Maneki Neko

The height of the paw also has a meaning. The range of height can be anywhere from around the mouth to well over the tip of the ear. According to legend, the higher the paw, the farther the Maneki Neko invites the customers from i.e. the greater will be its reach. Fascinating stuff!

The Color of Maneki Neko
Maneki Neko comes in different colours. The most popular are those that are tri-coloured. The tri-colored cat is considered a lucky charm worldwide. The male tri-coloured version is especially revered as the lucky cat by sailors around the world. Genetic study has revealed that the tri-colour gene in male cats are extremely rare. The rarity of male tri-coloured cats has been a well-known fact in Japan for a long time. This is why many Maneki Nekos are created to have the tri-coloured look.

Many Japanese business people would never think of having a restaurant, store, bar, or shop without the presence of the beckoning cat. As long as it has at least one raised forepaw they can take many forms. The cat is waving to us, asking us to come into the shop or asking good fortune to visit the establishment.

Modern exponents believe that Maneki Neko should carry coins or have coins dangling from their bibs to ensure wealth. More prosaic origins may be tied to an agricultural belief that cats kept pests away from crops or satin worms and thus aided prosperity of the family. There are many variations on the Maneki Neko and you may see the left paw or the right paw raised. It is up to you whether you want more sales turnover or more profit.