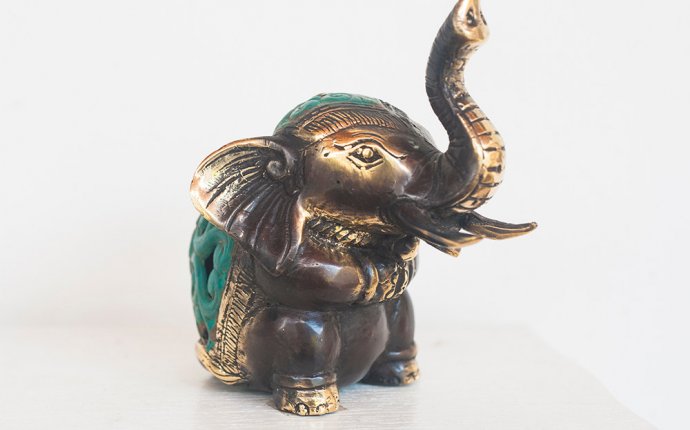 Somehow, these qualities of the elephant - excluding rationality - have become jumbled up with feng shui, the Chinese art of geomancy, which attempts to maximize good luck by aligning elements of the environment with positive energy.

For instance, if you wanted to advance your career, and you were a nitwit, you might consider placing a figurine of an elephant in the "career" area of your house, to attract wisdom and power towards it.

Or you might place a model elephant on your desk to help you win out in the rough and tumble of office politics.

Elephants are also believed to be protective, so pairs of ceramic elephants are often used as guardians at the front doors of houses, one on each side, to keep safe the family within.

Now, as you've probably gathered, I don't actually believe any of this feng shui mumbo-jumbo - but I have placed ceramic elephant door guardians at my front door, just in case.

And recently, following a slight altercation with the doorstep and a coffee cup, I smashed one. Horrors!

Even if, like me, you officially think feng shui is a load of rubbish, I'm sure you'll agree that smashing a guardian elephant is not a good idea.

So today I set off to replace my poor smashed elephant. I went to Thow Kwang Pottery Jungle, which is, as its name suggests, a pottery set in the jungle, and hence much more exciting to visit than, say, the crockery department of Peter Jones.

It's approached via a bumpy lane that winds between enormous vine-hung trees.

Some of its dizzying selection of vases, plates, lamps, umbrella stands, urns, statues, plant holders, teapots, tea cups and so on and so forth are displayed outside under the blazing sun, or the pelting rain, depending, but most are piled inside barn-like structures, that have roofs, but no walls.

Very often there are monkeys swinging in the rafters, but today I didn't see any.

As well as being the occasional home of monkeys, Thow Kwang also boasts a resident dragon - it is the site of a famous dragon kiln. This is a very long brick-built kiln that looks like a dragon (or a snake) wriggling down a hill.

Dragon kilns (long yao) have a distinguished history in China; their use can be traced back 2000 years in areas such as Fujian and Guangdong.

The technology was brought to Singapore by immigrant artisans in the early 1900s.

During firing, a dragon kiln apparently resembles a recumbent dragon with fire spewing from its nostrils, but I can't vouch for this, since Thow Kwang's is now rarely fired, and every time I've visited it's been dormant.