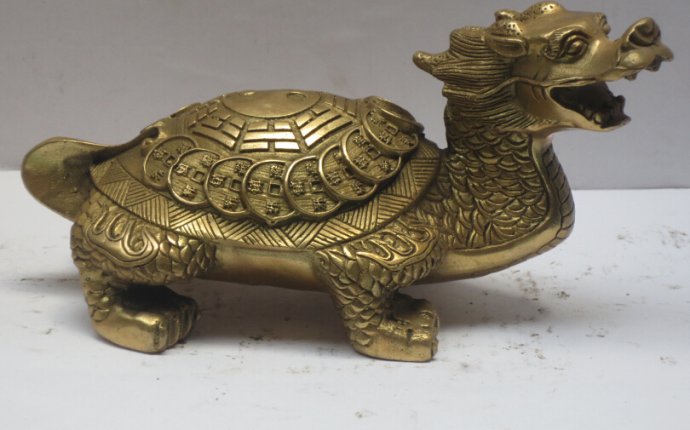 The dragon turtle cure is very popular in classical, or traditional feng shui schools. You can find it in most feng shui shops, as well as in any Chinatown. From small souvenirs in cheap metal finish material to beautifully carved jade statues, the dragon turtles cure is one of those strange things always associated with feng shui.

What makes the dragon turtles cure so popular? What is it used for?

Can the dragon turtle cure help you create good feng shui in your home or office? Let's explore.

WHAT IS THE DRAGON TURTLE CURE?
The dragon turtle has the body of turtle and the head of a dragon, and is most often standing on a bed of coins and ingots and holding a coin in its mouth. It is often depicted with one or several baby dragon turtles on its back, as well as a ru yi.

There are many attributes assigned to the dragon turtles cure - from attracting wealth to protection to improving career. To understand this cure, let's look at its specific energies. Both the dragon and the turtle are considered celestial creatures and are part of the four feng shui guardians assigned to each of the four cardinal directions.

The green Dragon is in the East, the red Phoenix in the South, the white Tiger is in the West and the North bagua area of a home or office has the black Turtle.

So, a combination of two celestial animals logically makes for a more powerful force, especially for a person who grew up in a traditional Chinese household and is very familiar with these symbols.

The energy of the dragon is associated with courage, auspiciousness and good luck; it is one of the most powerful symbols in traditional feng shui. Turtles bring the energy of stability, longevity and protection, they are an ancient energy associated with the wisdom of earth.

As an expression of both these energies, the mythical dragon turtle became a feng shui cure for lasting wealth (when it has coins and ingots), or a cure for protection and authority, in which case it would have emphasized claws and a big ru yi on its back.

WHAT IS THE DRAGON TURTLE USED FOR?

1. To Attract Wealth. As a wealth feng shui cure, the dragon turtle is placed in the Money area of your home or in your lucky direction for attracting wealth. For this purpose, you would usually choose a golden coloured dragon turtle that has many coins and ingots all around it, as well as a Chinese coin in its mouth. A baby dragon turtle on its back is also a good addition to the dragon turtle as a feng shui wealth cure.

2. To Advance Career. To use the dragon turtle in matters of business and career advancement, go for a dragon turtle with a ru yi on its back, as well as strong, defined claws.

You would place this dragon turtle in wither the North or Northwest bagua areas of your home or office facing your lucky direction. Be sure to choose a good quality bronze statue or one carved from a crystal or stone.

3. To Neutralize the Energy of Negative Stars. A metal dragon turtle is also used as a feng shui cure to neutralize the energy of negative annual stars, particularly the #2 and #5 stars. In this case it brings strong protective energies as related to the fiery and courageous energy of the dragon and the watchful guardian energy of the turtle.

@...therefore, I am.: I'm ready to step inside you and feng shui your being.

@evie eve: Well never been cheated on. God keep it away if that's the case. Good feng shui only.

RT @sophie_mhj: ur not allowed in my apartment ur gonna fuck up the feng shui

@stevedog: 9:53p-- rearranging furniture in my house because the feng shui isn't right