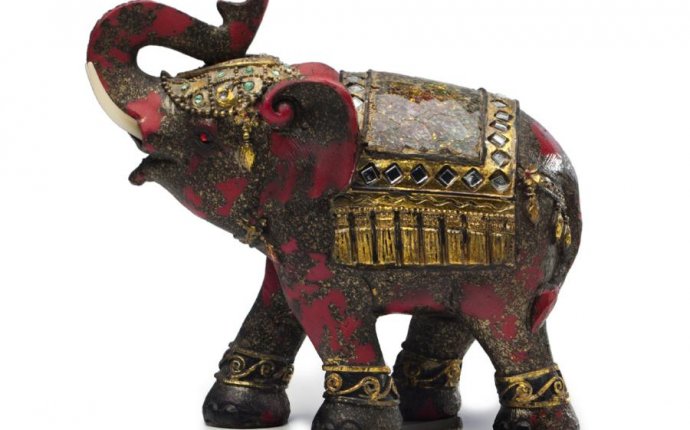 In Chinese art, the elephant is a symbol of wisdom and strength. Elephant is also considered as a sacred animal in Buddhist traditions. Buddha is often depicted riding an elephant. This magnificent creatures are also regarded as auspicious figures in Thailand.

The word for elephant in Chinese is written and pronounced the same as the Chinese word for “sign” or “things to come” therefore people like to pairing elephants with certain symbols to create a kind of pun. People also use a stone elephant to emphasize the concept of power or strength while an elephant with a vase is interpreted as a sign of peaceful times. In Chinese, the words for “vase” and “peace” have close pronounciations. Elephants carrying vases on their backs were featured in parades to celebrate the Emperor’s birthday during the Qing dynasty.

Another popular motif shows a little boy riding on the back of an elephant. The phrase “elephant rider” in Chinese sounds similar to “fortunate” or “auspicious”. This pairing announces the arrival of good fortune.

Elephants have a reputation in both Indian and Chinese culture for attracting wealth and good luck. In Feng Shui, there are many application of the use of elephants depending on its material and its placement in the office or home. While some feng shui experts believe that elephants should be placed in specific areas and facing certain directions but you can be confident that you can place them either facing or looking out of your home. Pictures, photos and drawings of elephants can be used in place of a statue or a figurine. The application for feng shui elephants is actually different for each room and various directions.

Placing a pair of elephants or an elephant at the front door is believed to bring good luck, strength and protection to the household. Sometimes these elephants are referred to as elephants of many blessings. Feng Shui experts suggest that the feng shui elephant should have its trunk facing upwards as that represents victory, good luck and prosperity. Some people believe that elephant with its trunk facing downward represent conception and longevity.

A laughing Buddha riding an elephant with chiIdren on his lap is an excellent symbol for happiness and prosperity in family. Place this statue in areas where your family spends time together such as the den or game room.

Elephants with their trunks raised in a trumpeting effect and standing on their rear legs are excellent symbols of protection and power. Place this kind of statue at the front entrance of your home as the guardians.

A statue of mother elephant and its baby symbolizes the love and bonding between a mother and her children. This will make that bond grow stronger.

An elephant or a pair of elephants displayed in your bedroom helps to promote faithfulness and love between two people. In order to enhance the love between couples, the statues can be placed in a study or office. For those who want to have child or more children you can place elephant statues in your bedroom, beside your bed or close to your bedroom entrance leading towards the bedroom. A statue or a group of seven elephants can be used in the bedroom as that symbolizes fertility and the number seven represents children in feng shui. Buddha’s mother dreamt about white elephant and got pregnant after that. Elephant of white color is the purest of all form, it is believed by many people to be the incarnation of future Buddha.

Place an elephant statue in your child’s bedroom, on the desk, or wherever she or he does homework in order to bring knowledge and academic success.

You can place the elephant in your exercise room to bring greater strength and power.