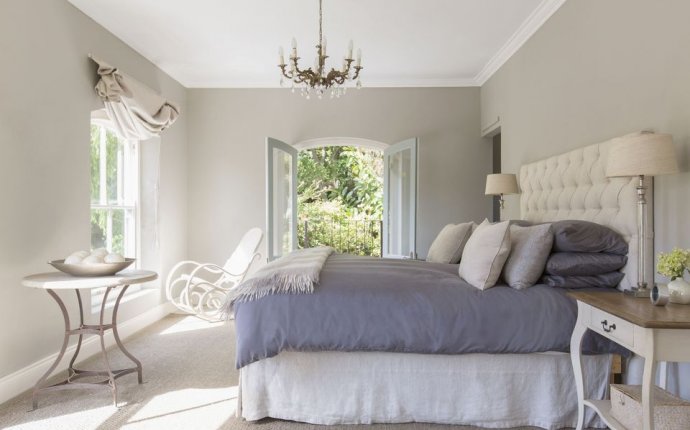 According to Feng Shui bedroom

In feng shui, the "commanding position" for the bed is as far away from the bedroom door as possible, but in a spot which still allows you to keep an eye on the room's entrance. "This gives you a sense of safety and protection while you rest, " says Jayme. The corner of the room diagonally opposite the door is usually best, since it distances you from the door while keeping the bed out of direct alignment with the room's opening, which is conducive to sleep, relaxation and healthy chi.

Headboards, especially solid ones made from wood, are considered good feng shui because they provide additional strength and support behind your head. Footboards, on the other hand, are seen as blocking forward progress in life.

The Exception to the "No Footboard" Rule

Make sure your feet don't point out the door while in bed. In traditional Chinese culture, this is called the "Death Position" because the deceased are carried out feet first. Practitioners believe sleeping this way can drain your life force. If you can't avoid it, use a footboard or a substantial trunk or other piece of furniture at the foot of your bed to act as a buffer (this is the one exception to feng shui's normal "no footboard" rule). Finally, leave enough room around the bed for energy to flow freely, and for each partner to get up with ease.

"Less is more" also applies to the closet. According to experts, clutter behind closed doors can be just as depleting as clutter that's in the open. "If you feel irritated, confused and overwhelmed when you open the closet door, organizing your closet will help give you a sense of control over your life, " says Terah. Ruthlessly weed out clothes that are unflattering, out-of-style or no longer worn, then sort by color and season. Install organizers to hold shoes, belts, scarves and other accessories, and move everything else choking your closet to another spot. Better yet, give it away!

Create a Space for Couples

One is indeed the loneliest number — even when it comes to bedroom furnishings and decor. "Having only one nightstand or space on only one side of the bed to climb in and out is very symbolic of solitude, and can actually hold your single status in place, " says Terah. "Single people also tend to have accessories and art that depict solitude, [like] a single flower in a vase."

Instead, if you're single and don't want to be, "decorate your bedroom as if a partner is already there, " Terah says. Symmetry is key, so position nightstands and lamps on both sides of the bed. Accessorize in pairs or multiples, too: Place a bunch of flowers in a vase and hang art depicting romance and unity, which feng shui gurus say creates a "couples' energy" as well as a sense of balance and abundance in the room.

In the feng shui "map" of the bedroom, called the bagua, the far right corner is the "love center." Whether you're single or coupled, consider building a "shrine to love" in that spot. Accessorize a table, dresser or shelf with a photo of you and your mate (or other art that depicts a happy couple), a pair of candles, a book of romantic poetry and a heart-shaped box. "It becomes an environmental affirmation of your relationship goals, " Terah says. A thriving plant with rounded, not spiky, leaves is another nice addition. Silk plants or flowers are OK, according to feng shui practitioners, but never keep a sickly specimen or dried foliage here, since their symbolism is obvious.

Another feng shui no-no: king-sized beds. Not only do they create a physical chasm between you and your mate, but they "are split down the middle by two box springs, which creates a symbolic dividing line between partners that can affect their unity, " David Daniel Kennedy, a feng shui teacher and consultant in Berkeley, Calif., and author of "Feng Shui for Dummies" explains. If you're not about to trade in your beloved California King, even for the sake of your other beloved, a red sheet placed over the box springs will help unify the two separate halves.

In addition to creating a room that's beautiful to look at, take time to appeal to your other senses as well, by filling your bedroom with things you love to smell, touch, taste and hear. "Make the bedroom your sensory treasure box, " says Terah.

How to Feng Shui your bedroom?